Last week we finally got around to finishing one of the fixes to one of the mistakes we’ve made on the house.

You see, when we started figuring out exactly where the doors go, and how much space they take up, we realized that my calculations for where the anchor bolts should be were incorrect in several instances.

That meant cutting off the bolt that was in the wrong position and drilling a hole in the concrete for a new anchor in the correct position. 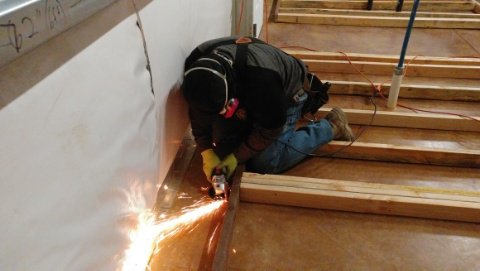 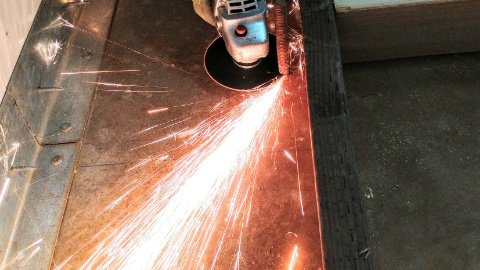 Yeah, that one right there with the enormous header. Yeah, that one. The header is supposed to sit on top of the wall, not be built into the wall. So, that meant tearing apart the work we had done, fixing it, and rebuilding it.

Our friend putting in the final nails on the re-built wall.

Other times we used screws where we should have used nails and had to replace them all. Some studs got notched too aggressively and had to be replaced or braced. One wall is a full 2 inches too short. No idea how that happened! Luckily the only thing that will affect is sheetrock. So we will add in another 2×4 in order for the sheetrock to have something to attach to at the top and once it’s covered up, you’ll never know.

We’ve done a lot of things better than average with this house, but we’ve also made a lot of mistakes along the way.

And we’re ok with that. Because here’s the thing, when you’re learning something new, there are bound to be mistakes. Mistakes are normal. And nothing to be feared. Yes, it’s annoying to have to re-do work. But that’s all it means. So far, we have not run across anything that cannot be fixed. I actually cannot think of one single thing we could do to this house that we couldn’t fix if we learned we had done it wrong. Fixing mistakes takes time and usually money, but there is always a way to fix it.

And that is a very freeing concept.

When I was cutting a 12 inch hole in our roof for the stove pipe, I told myself that if I totally messed up, the roof panel could always be replaced. No big deal. Now, in no way did I want to replace that panel, but it gave me the courage to make that first slice.

And right now (well, after I recover more from my fall – yeah, that was a HUGE mistake!), we are working on subfloor on the second story. I’m nervous because not only is the plywood nailed down, it’s also glued down. Which means if we’ve made a mistake, it’s gonna be a whole lot harder to fix. But, in some way or another, it would be fixable. So, I research and learn as much as I can, and then I go for it, knowing I’m working to the best of my abilities.

We can’t let the fear of making mistakes stop us.

Whether it’s building a house, planting a garden, sewing an outfit, starting a business, whatever: mistakes are gonna happen. It’s how we deal with them, learn from them, what our attitude is, that really matters.

So, the next time the fear of failure (ie, making mistakes) has you stalled, just remember that the only real failure is the failure to pick yourself back up, learn from your mistakes, and try again.

Our mistakes are learning opportunities. You are gonna make them. Just remember, they are there to teach us, not to stop us. Don’t let the fear of making them keep you from moving forward.

1 thought on “Mistakes are gonna happen”