First, we had to delay starting our house because we had to move to Portland for almost 2 years to help care for the Hubby’s mom.

We ended up needing to plan a bigger house than we originally thought in order to accommodate Hubby’s folks moving in with us.

Then we had to completely move the location of the house from one side of our 40 acre property to the other because the original site didn’t have a good spot for septic.

We planned to get more work done over the winter, but the weather did not cooperate.

And here we are, having to change some of our house plans. 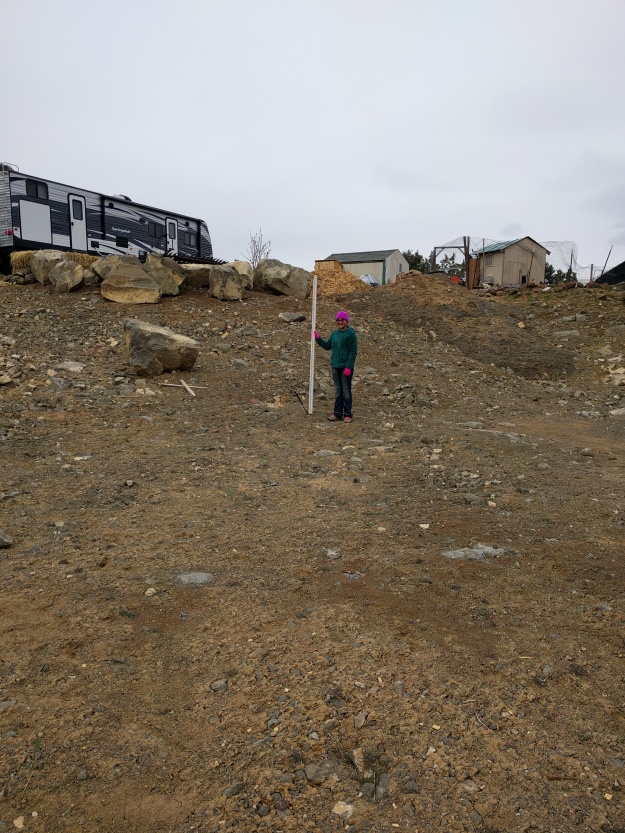 Plotting the original corner of the house

It wasn’t a major change, we just changed the directional orientation of the house a few degrees. It amounted to moving the house about 15ft. Not that big of a deal, except that it really cuts down on the amount of driveway and parking area we’ll have. It was just feeling…Well, cramped.
And yes, we do have 40 acres, but only about 3 of those are not on the side of a steep hill. And the house pad is carved out of the side of one of those hills. So we are kinda limited on space in some ways.

But I digress. Since we changed the angle of the house, we had to look at where the detached garage is going to be built and how to get more space.

Which made us consider doing some earth moving in a area where we planned to put our orchard.

Which would give us much more space on the house pad, but where to put the orchard instead?

Which made us look around and decide that the other logical place for the orchard is actually better.

Which made us realize once again that when plans have to change for one reason or another, there’s usually a silver lining. I could go down the list at the beginning of this post and show how  because we had to do it differently than originally planned, we’re actually better off now than we would have been had our original plans gone through.

In the Bible, James tells us that when we make our plans we need to realize that God is the one who is ultimately in control and we can only follow through with our plans if it is his will (James 4;13-15). Similarly, Proverbs 19:21 says, “Many are the plans in a man’s heart, but it is the Lord’s purpose that prevails.”

We try to remember these truths when making our plans, and realizing that when plans change, it’s all for the best, in one way or another.

2 thoughts on “Change of plans”