You know what it’s​ like when you’re trying to accomplish something, and it seems like everything keeps going wrong and you just can’t catch a break?

When for every two steps forward, you have to take one or two backward?

Yeah, we had that happen. Yet again.

You see, we had our footing forms all built, leveled, and were starting the bracing in preparation for putting in rebar.

So, we had to break down all those footings into sections. All those beautiful forms we spent so many days building.

All had to be moved so we could bring in a backhoe and dig under the footings.

Under footings all dug 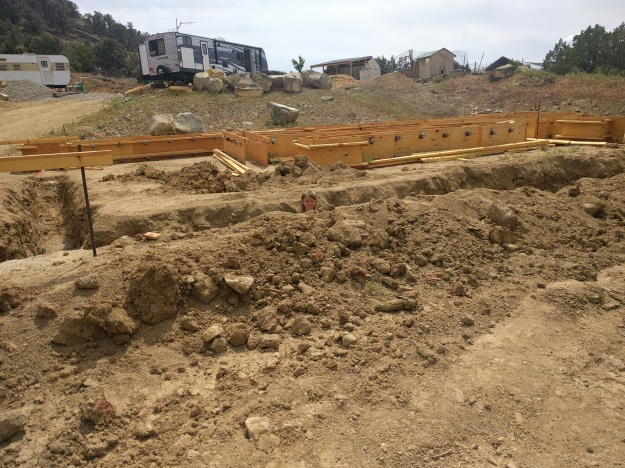 Do you see her?

After a couple weeks where we were waiting on inspectors, I had to work several days at my summer job, I got sick with a horrible allergy induced head cold, and we had to wait for the holiday weekend (Memorial Day), we finally got to pour concrete.

We were told we needed a “2 sack sand slurry” to fill the trenches. I estimated we needed 18 yards. Boy, was I wrong! We ended up needing about 25 yards.

Not knowing what a “sand slurry” was, we really had no idea what to expect.

Turns out a sand slurry is basically just sand and cement, no gravel. And it’s pretty soupy. Made it easy to just flow into the trench. We barely even had to screed it. Just enough to make sure it was at or below grade.

It set up very quickly, and at the moment is the consistency of packed sand. 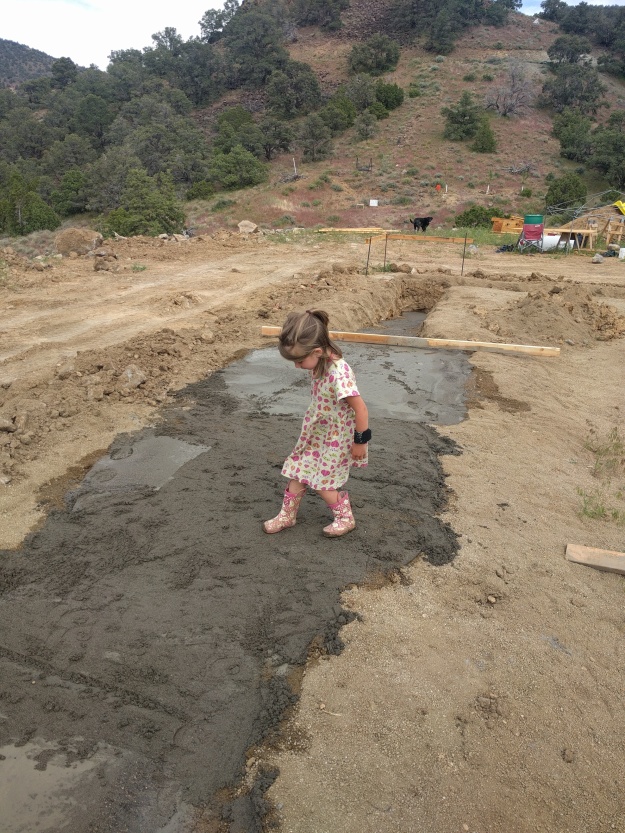 Set up enough to walk on within minutes

We do not know what it will be like when it is cured. Will it harden into more of a concrete consistency, or stay sandy, or something in between? 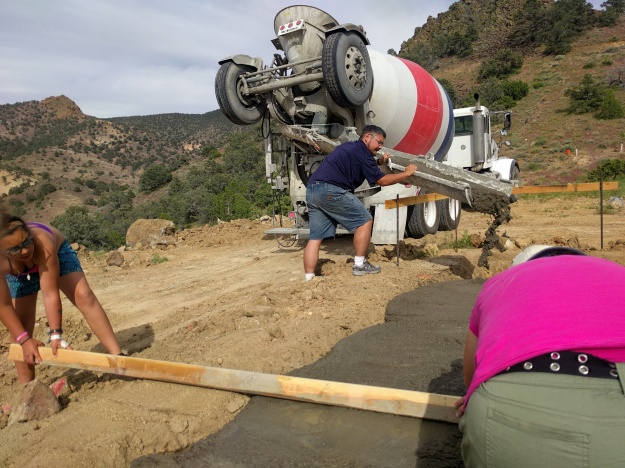 After pouring the concrete, we decided to watch the sunset from our new area for our Sunset Swing (finally moved it down to our new location). Unfortunately, it was too cloudy for a sunset, but the Hubs and I enjoyed sitting there as the light faded and looked at what we had accomplished. I’m sure many more pictures will be taken from this vantage point in the future.

So, we did get a huge chunk of work accomplished today.

And I am reminded that two steps forward and one step back is still one step forward. And that is one step further in the right direction.

Also, there is this:

There will be many set-backs as we build this house. I could get all bent out of shape. I could get frustrated at the slow pace. Or, I can look on the bright side, and learn to dance!