I remember posting on my Instagram account a picture of a little rolly cart we have in the house. 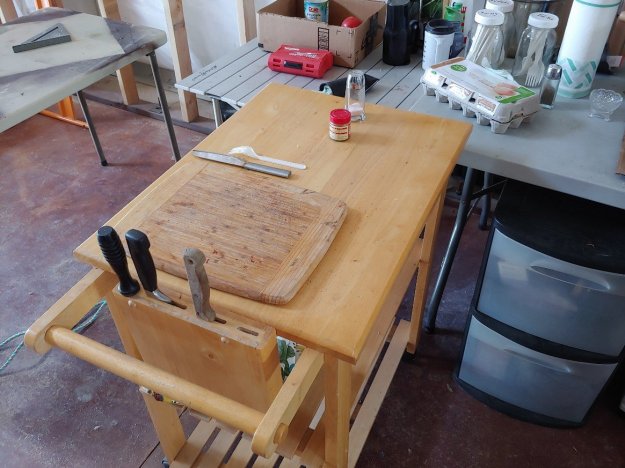 Nothing special about this freebie cart. What’s special is the amount of natural light shining on it.Obviously, this was after we had gotten some of the doors and windows cut in.But let me back up a bit.Normal houses are built with the window and door openings already there, so you just gotta put in the actual windows into the openings, and you’re done.

Source: Google imagesBut, as we all know, our house is not a normal house.We basically have a house inside of a house. The shell is the metal building, and there is a 2×4 stick-built house inside. 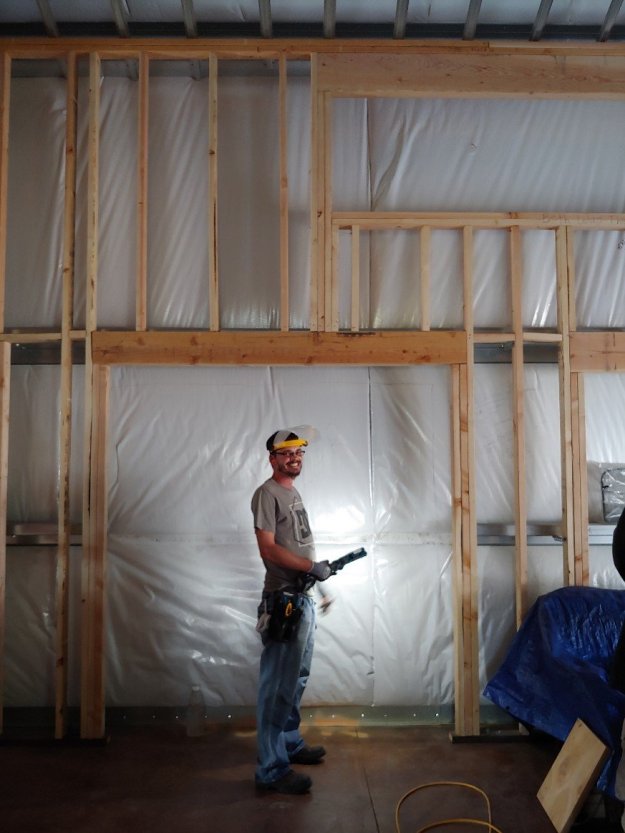 Same wall as the previous pic – Interior – before door and window openings are cutWe chose to not have the metal building designed with all the window and door openings because we knew we’d be building these interior walls during the winter time. Because of how we needed to attach the interior walls to the exterior walls at the openings, we could not put the windows in until the interior walls were built.Which means, if we had already had the openings in the metal building, we would not have been able to heat the house and keep working in it over the winter (which was when we were building those walls). We would have lost all that working time.And would have been even further behind than we are now.But we finally got all the interior framing done, so it was time to tackle the windows and doors!We are planning on making a blog post and even a video about the actual technical method to put in the windows and doors, but for now, here’s the less detailed and less tedious (I hope) version.The first window we put in was next to the front door. 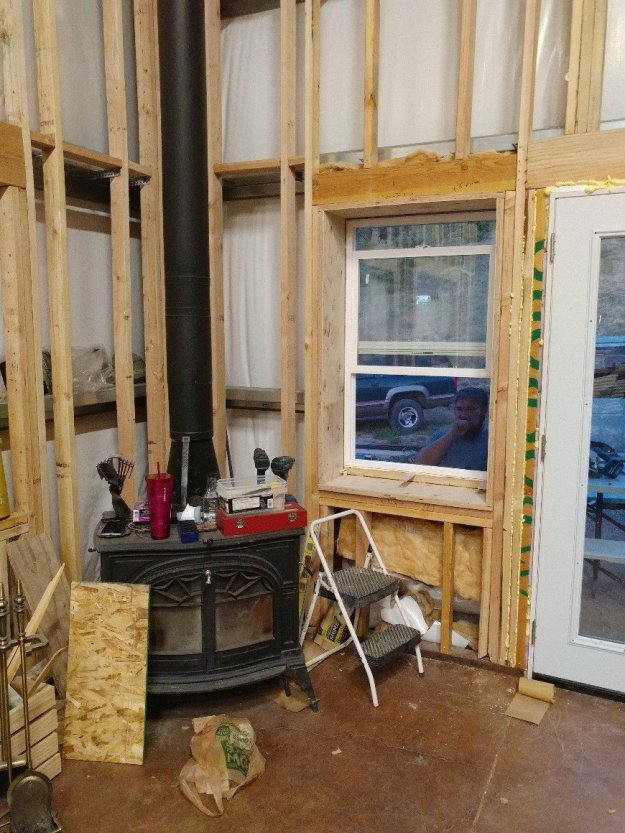 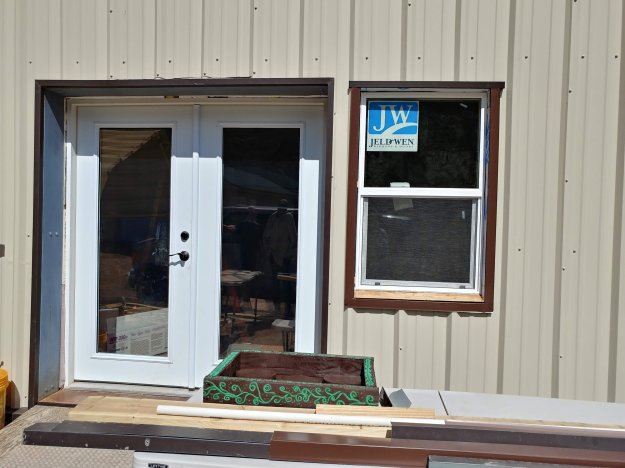 Since it was right next to a door with a lot of glass in it, I felt like this one window didn’t make a major difference in the look of the living room or the light that was coming in. I mean, it was cool to be able to see a slightly different view, but it wasn’t a huge change.The next opening we did was the sliding glass door in one of the downstairs rooms.This one took a full week of us working on it several hours a day to figure out how to do it. 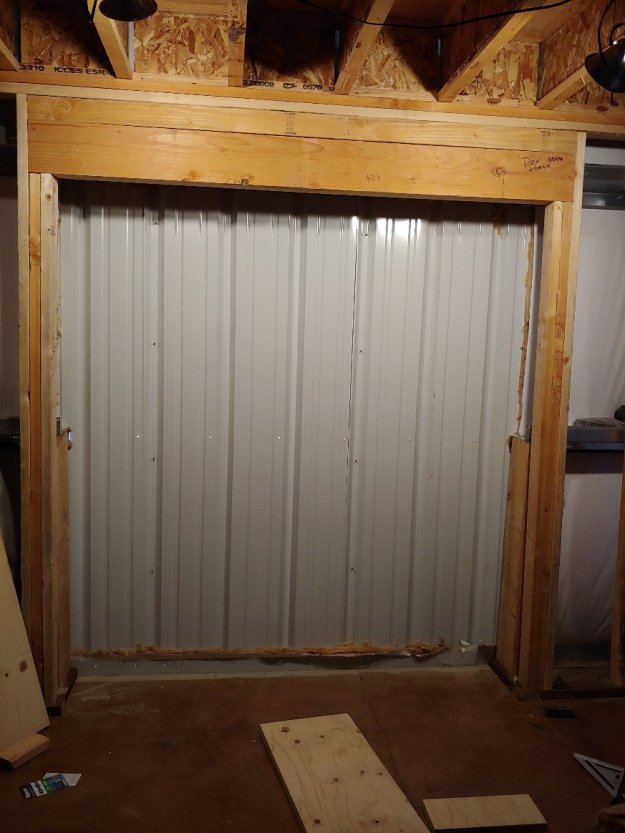 While we were figuring it all out and working on it bit by bit, the weather decided to not play nice. 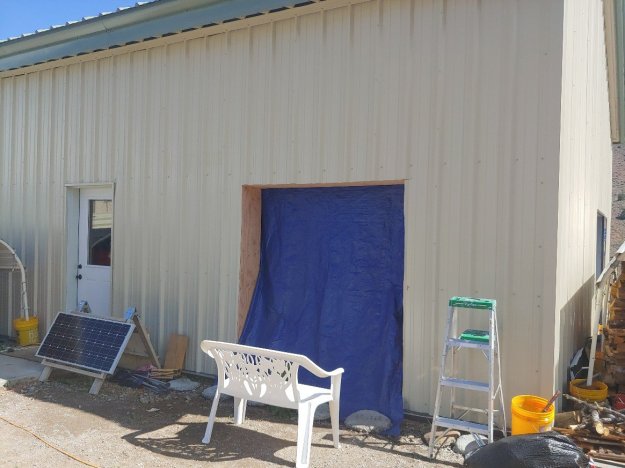 But eventually we were able to get the door installed. 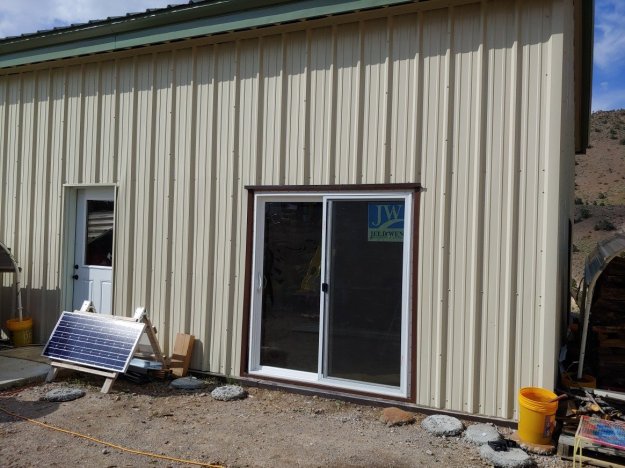 And let me tell you, this door made a difference!The main door we used up to this point was the laundry room door (to the left of the slider in the above pic.)Since the interior walls are all still just open studs, the light from this door not only lights up that room, but spills out into the other adjoining rooms.

It was definitely something to open that laundry room door and walk in like we’d done hundreds of times before, and be greeted with light!Next was Pajii’s bedroom sliding glass door. It did not take us nearly as long this time to get it in as the first one. And I don’t get hardly any pictures. But I think he likes it!

After that was one of the doors I was most excited for, the dining room slider.This is the door opposite the front door, and was sure to let in lots of natural light to an end of the house that was perpetually dark. 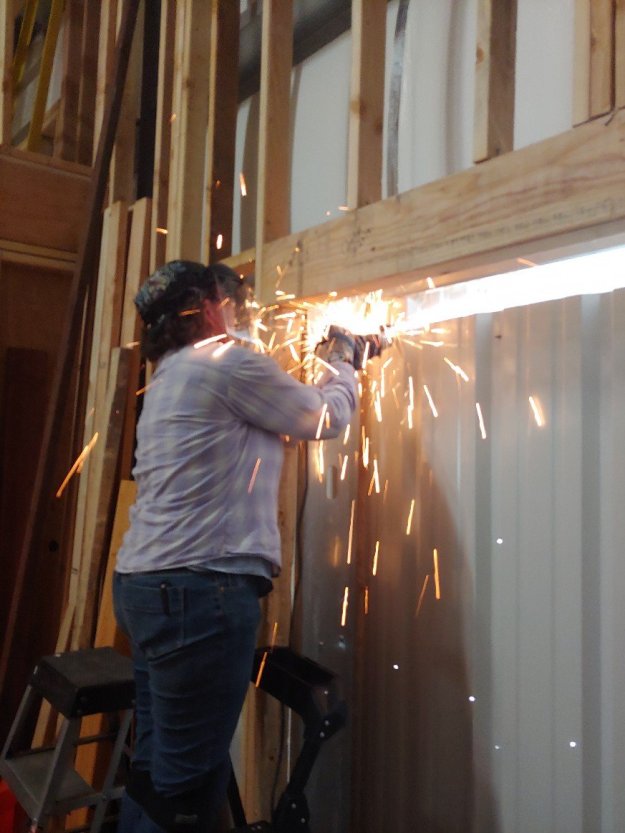 Just a peak!My nephew came over a couple evenings and weekend or two and helped put in doors and windows.

We worked until after dark on one of the longest days of the (less than 10 days before the solstice) to get that door in! 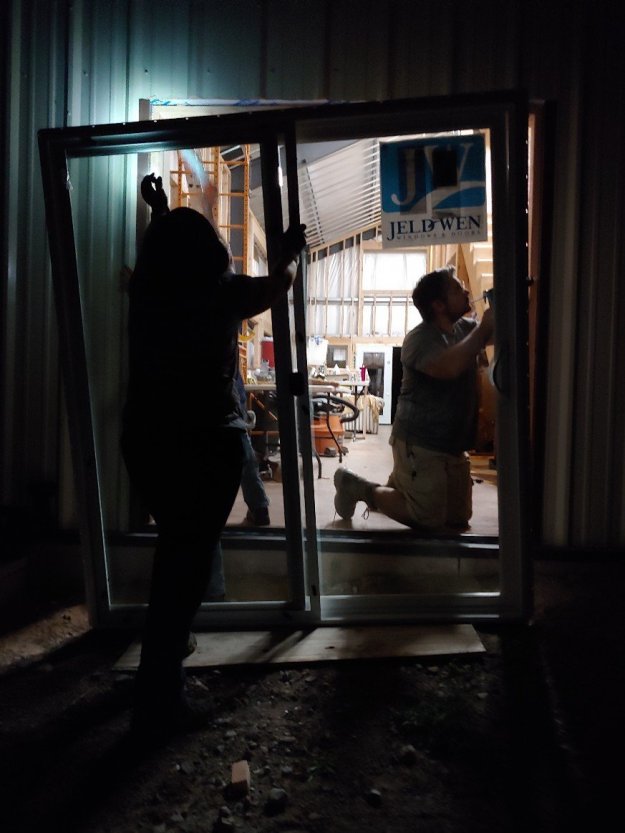 Had to finish by flashlight, but finish we did!After that things went a lot smoother and faster. We knew what we were doing by that point. 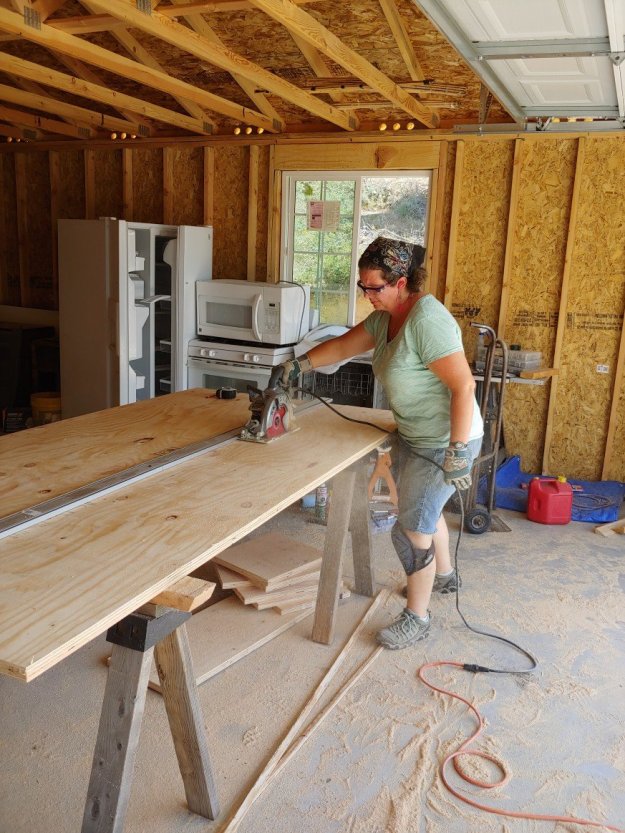 Cutting the 1⅛” plywood that we used for the frames.

Anchoring one of the metal side supports to the concrete floor.

And then came the part I had been dreaming about since we first sketched up the design for this house.The Big. Picture. Window.If you follow me on Instagram, you might remember that back in March I posted a poorly photoshopped picture of what the view out our picture window might look like. For those that did not see it or don’t remember, here it is.

I was just dreaming of the day I could look out that window to view up our canyon. I mean, seriously, I’ve been dreaming of that literally for years!And it was finally happening!

Another late night finishing up the job

I love my big window!After that, it was time to move upstairs to the second story windows.

Flower Girl and her cousins wanted to watch the “fireworks”

We can actually see all the way down into the valley from our bedroom window!

Working on the second floor windows presented some extra challenges, especially on the one window we could not access from the outside for various reasons. So we had to get creative.

Putting my climbing skills and gear to good use

We watched some friends’ kids one day and I put their 11 year old son to work. 😁

And suddenly it was starting to look like a regular house, not a warehouse!

The side in the shade is still missing four – yes 4 – windows in this pic!

It there were several windows we had to special order because they were odd sizes, so those took a little while to arrive.But eventually, we put in the very last window.

And now some pictures of the interior with no artificial lighting turned on. All the light in the following pics is natural.And in some of them, not every single window opening is actually cut yet! We love all the natural light in our house! 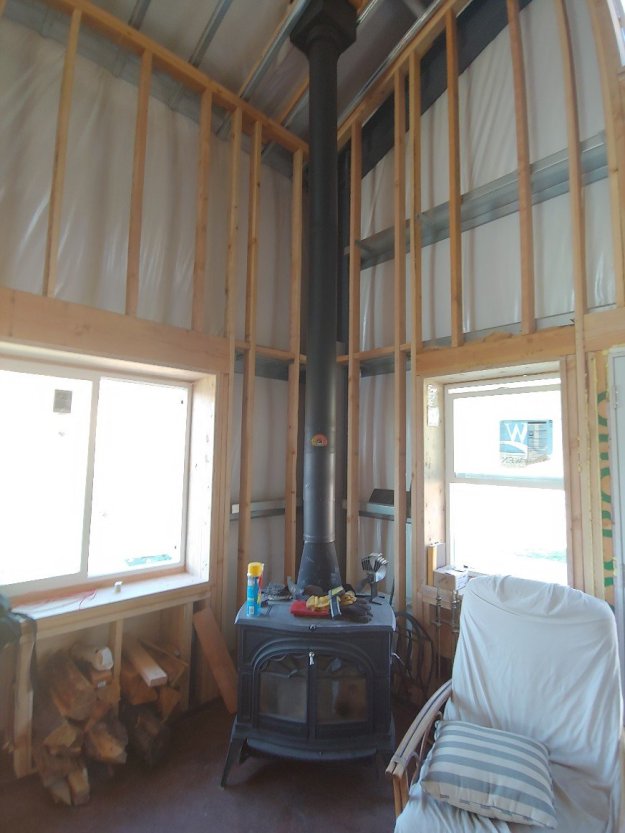 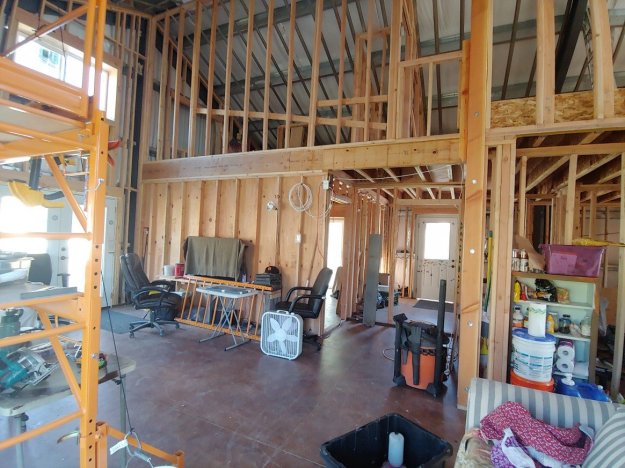 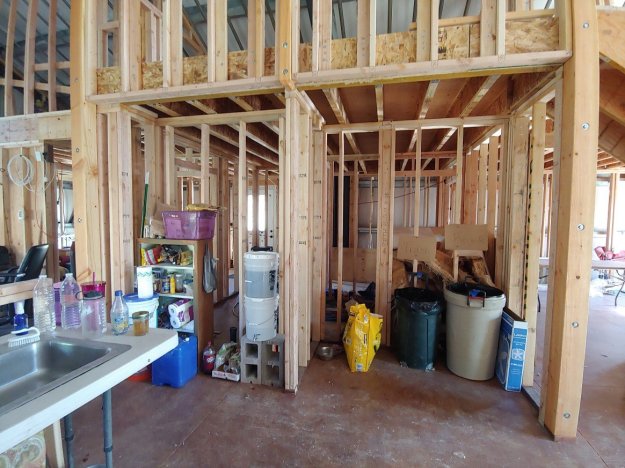 Window in Pajii’s room still uncut (on the right). That is a south facing window, so it now let’s in a ton of light. 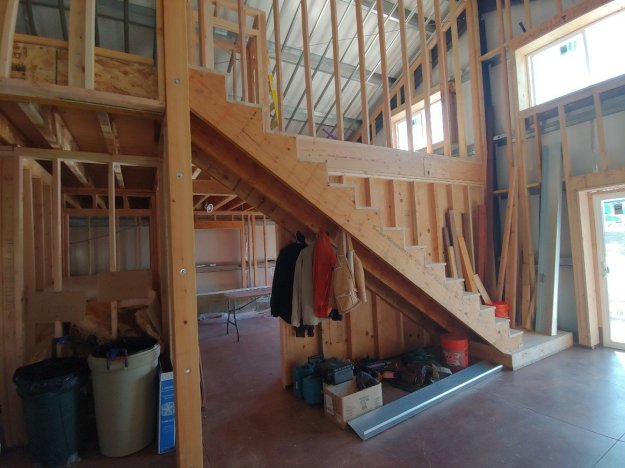 One of the upper great room windows waiting to be cut 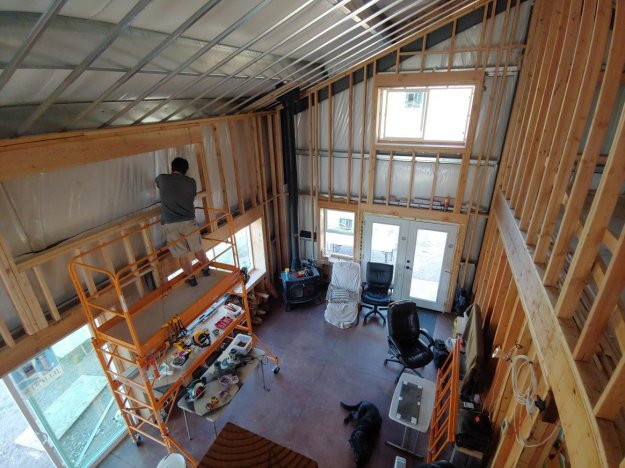 You can see Hubs on the scaffold just starting to work on one of the upper great room windows.

Window in the girls’ room still not cut either

And that brings us pretty much up to date on the actual house!As I said in my last post, windows and doors pretty much ate up June. July was taken up with a family vacation. And August has been just little things here and there.Though we did figure out where all our outlets and light fixtures are gonna go!Princess Girl and I installed all the boxes. 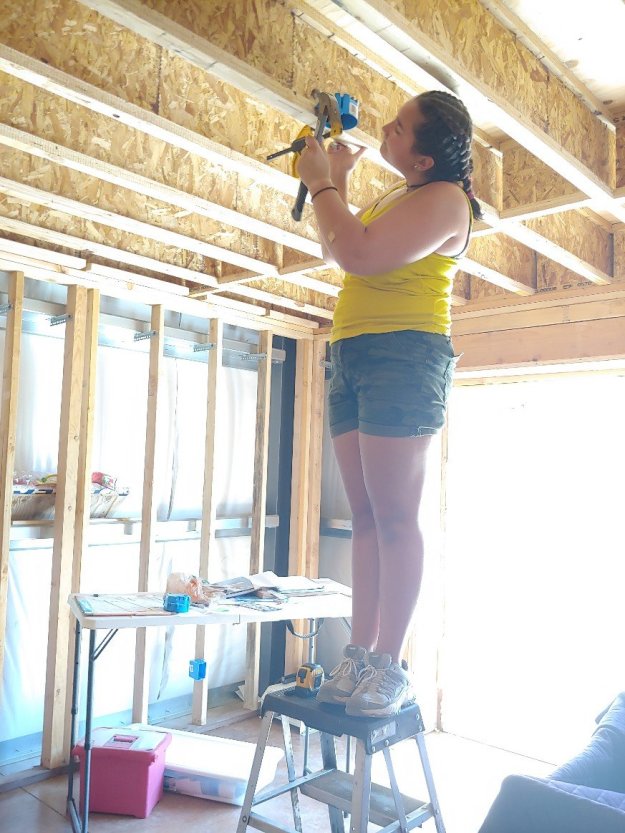 And as you can see from those last couple of pictures, it is definitely summer around here – workin’ in shorts and tank tops – when we have the energy to work at all!If you’ve made it all the way here to the end of this post, you are amazing! Thank you for reading! 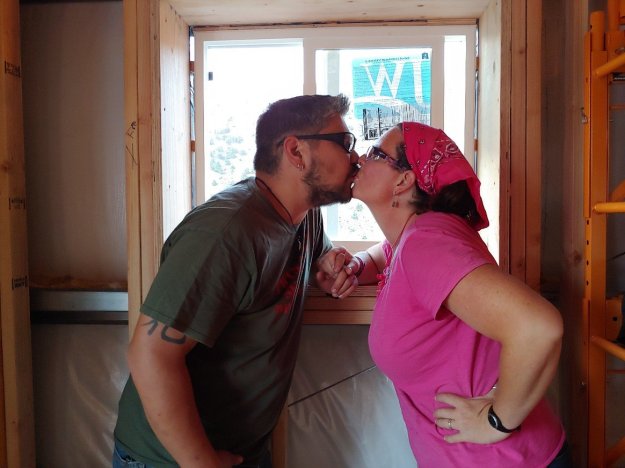 2 thoughts on “House update: Let There Be {Natural} Light!”