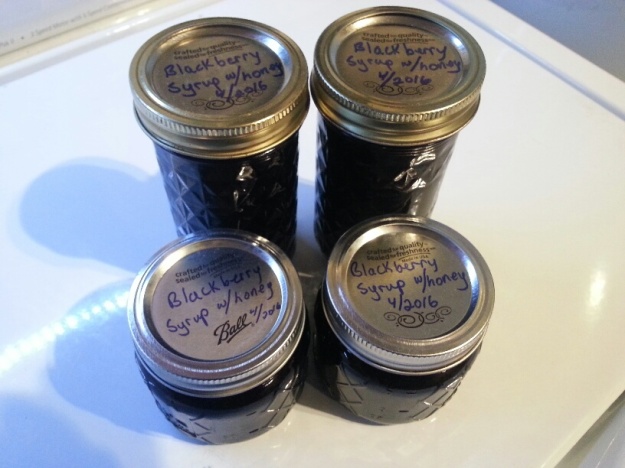 So…we’re moving in just a couple of weeks. And we had a freezer full of food to eat up since we will be living in camping trailers and won’t have freezer space available to us (have you seen how small those freezers are?).

We had several bags of wild blackberries in the freezer from two summers ago. First of all, they just needed to be used. Because, you know, two summers ago!

Second of all, as I said, we don’t want to transport frozen food to Nevada. So we either needed to eat them or transform them into something that is doesn’t need to be refrigerated/frozen.

We had so many that we could eat cobbler several times a week from now till we leave. And as much as we all love cobbler, we’re just not that into desserts around here. We see them as a treat rather than a staple.

So a canned good of some sort was the order of the day.

I coulda made jam. But as much as we had would have probably made about 5 pints of jam. Way too much for us to go through. That would have lasted us years! We just don’t eat that much jam.

So I chose to make syrup. By straining out the pulp and seeds I knew I’d get a smaller volume of juice. Not only that, but one jar of syrup will be gone in just a couple of days. We don’t make pancakes all that often, but when we do, we open a jar of our delicious homemade fruit syurp, use it for the pancakes, and the remainder gets used in oatmeal till it’s gone a day or two later.

I started out with 10 cups of frozen blackberries. I put them in a pot with about 1 cup of water and heated them till boiling, then cooked them for about 5 minutes. I then took a potato masher and mushed them up to get out as much juice as possible.

After that, I scooped them into some jelly bags to drain. You could use a piece of muslin or linen fabric, or several layers of cheescloth if you don’t have jelly bags.

I hung the jelly bags from a cabinet doorknob and let them drip into a bowl.

They drained like that for about an hour or so. I probably could have let them drain for several more hours and gotten more juice out of them, but I was in a hurry.

I ended up with 4 cups of juice. I added this and one 1 cup of honey to a pot on the stove and started heating it. I chose this amount of honey because that’s what tasted good to us. Feel free to adjust the amount to your liking. You can also use any other kind of sweetener you’d prefer.

Once it was boiling, I sprinkled in about two tablespoons of no-sugar-needed pectin. I figured this would thicken it up into more of a syrup consistency without waiting for it to boil down on the stove. If you’d prefer not to use pectin, you can just let it simmer for a while on the stove, but be prepared to lose a bunch of volume. If you do use pectin, be careful not too add to much or you’ll end up with jelly!

Once it boiled good for a minute or so, I ladled it into prepared jars and processed it for 15 minutes in a boiling water bath. For detailed instructions on water bath canning, check out this site.

You can see from the following picture that the syrup is thick enough to coat the inside of the jar. Yummy!

Can’t wait to have some pancakes!

And yes, we left enough blackberries out to make a couple cobblers. 🙂

I finished my belt! 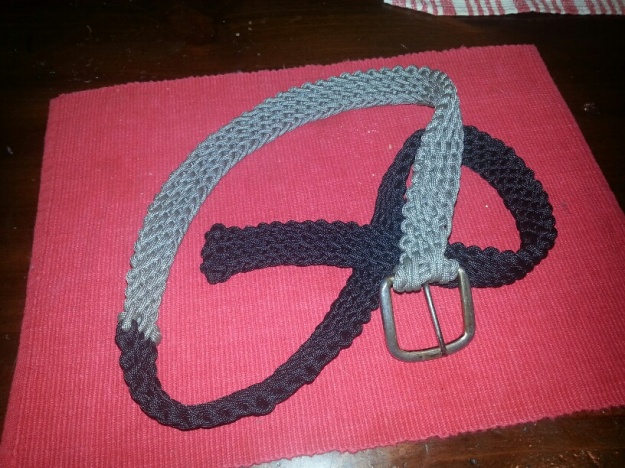 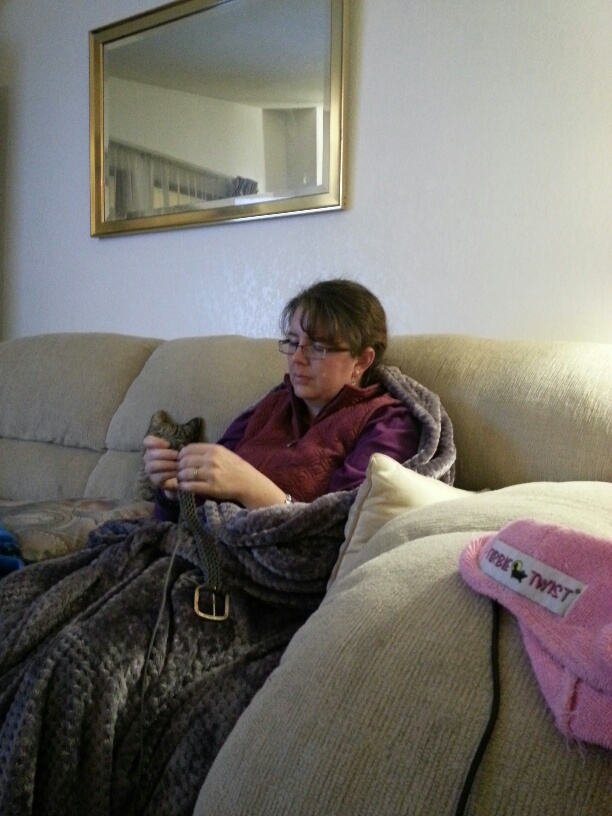 Overall, I’m very pleased with how it turned out. As you can see from the first picture, I ended up using two different colors because we didn’t have enough of just one. But I think the two tone effect is cool. Besides, people hardly ever see my belt since I never tuck in my shirts.

So, out goes the very worn bracelet. 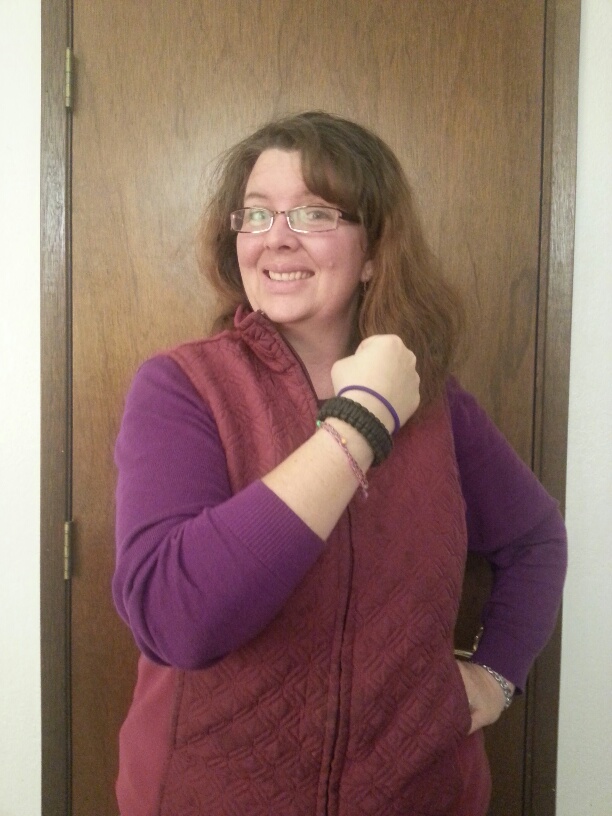 Well, maybe I’ll keep it for those days when I’m not wearing a belt. 🙂

Oh, and here’s a picture that shows the instructions of how to make a belt or bracelet using the weave I used.

Today I went for my walk, but it took twice as long to go the same distance. I kept getting distracted by all the signs of spring just around the corner. 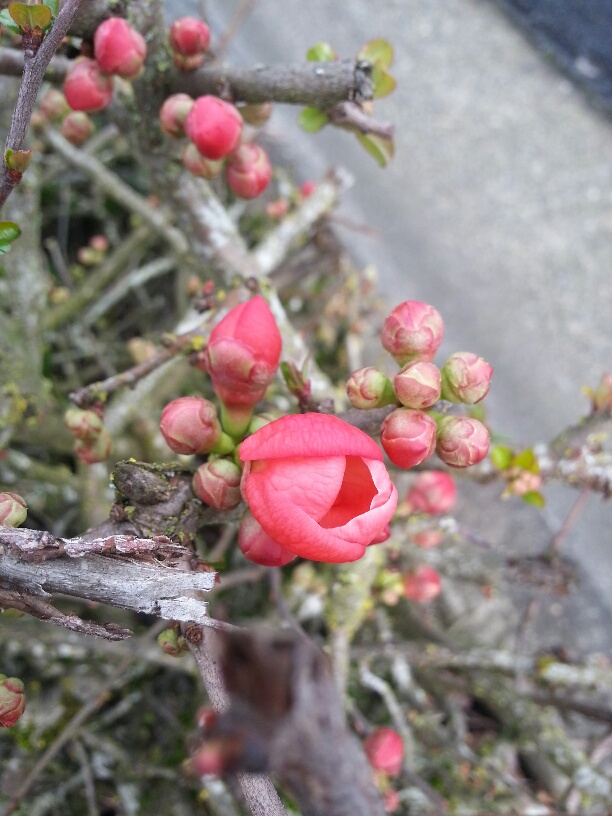 And I walked through the neighborhood park which has the wild onions growing and picked some for our dinner. 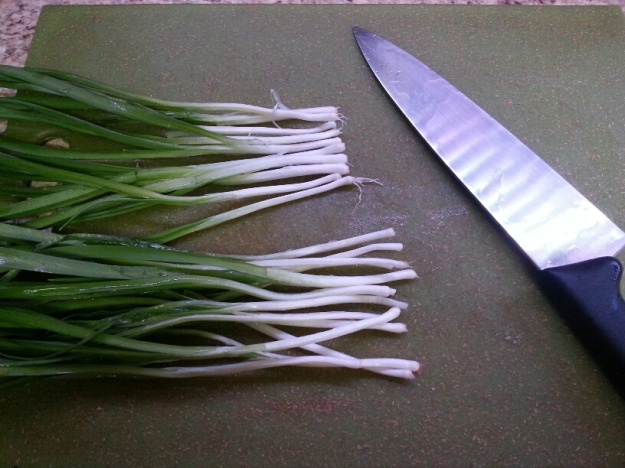 They are still small, but very flavorful.

Our house designer emailed us the house plans today. We are so very close to being able to submit the plans for our building permit. So Hubby and I spent a substantial amount of time going over everything, making changes were needed, and fueling our dreams.

Fresh salad, straight from our garden/yard. Yum! I needed to thin out the lettuce from the small garden, I picked some of the over-wintered-but-not-doing-so-well spinach from the big garden, and I found some dandelion greens in the yard. I had a head of purchased iceburg in the fridge and add to all that some borage flowers which just started blooming and you have a gorgeous salad almost too pretty to eat. Almost, but not quite. 🙂

I love that dandelions are considered a weed, yet they are edible and good for you. And the borage is a volunteer which comes back every year.

Edit: For the health of you and your family, be sure if you are harvesting any wild edibles that they come from a trusted source not treated with any harsh chemicals! We don’t use any herbicides or pesticides or even any fertilizer on our lawn, so I know the dandelions are safe to eat.